A small obsession of mine 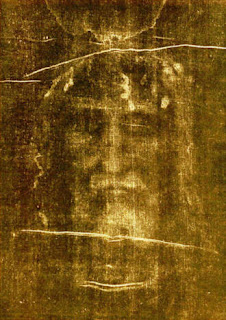 The Shroud of Turin and the Sudarium of Oviedo. I don't think anyone can look at the Shroud and not fail to be awed and moved.
I'm absolutely fascinated by them. I first saw the image on the Shroud when I was about twelve, and it quite frankly completely freaked me out, but I was totally hooked (in fact, looking at the Shroud still unsettles me).Then I read everything I could get my hands on, which at the time wasn't much, but got a copy of Ian Wilson's book The Shroud of Turin when I could. I've avidly followed all the scientific (and not so scientific) tests and theories relating to both cloths ever since, as well as subjecting myself over the years to some of the most tooth-grindingly awful TV programmes. I think my favourite is the theory that Leonardo da Vinci modelled the Shroud over a sculpture of his own head, and then used  fifteenth century photographic techniques to render the image on the cloth. I don't think anyone's yet managed to work out how he managed to fake his own (or appallingly, someone else's) crucifixion, or fabricate pollen evidence though. 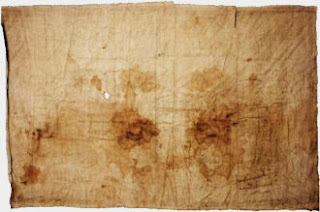 The Sudarium, perhaps not as well known, has no image on it, but its function and provenance is equally as fascinating, being traditionally the cloth that covered the face of Christ immediately following his death on the cross.

There are many, many websites and articles (this is just one of them) dedicated to both the Shroud and the Sudarium, and there will doubtless be many more as the Shroud is displayed in Turin this year, both attempting to prove and disprove it, and I'll probably have a look at them all!
Posted by Annie at 1:41 PM