...just briefly, to thank Fr Bruno for saying Mass on the Assumption yesterday at St Thomas More in Seaford, and to Fr Niven for his hospitality. 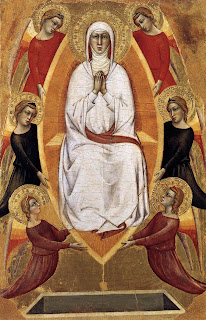 Fr Bruno preached on this wonderful feast of the hope shown, and encouragement given us by God. In both the Transfiguration and the Assumption, are glimpses of heaven; as Fr Bruno said, the top of the mountain is in sight.
Posted by Annie at 3:28 PM 2 comments: 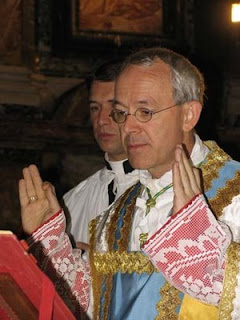 The Latin Mass Society has announced that Bishop Athanasius Schneider ORC, Auxiliary Bishop of Karaganga in Kazakhstan, will be attending the forthcoming priests’ training conference to be held at Downside Abbey from Tuesday 10th to Friday 13th August. Bishop Schneider will celebrate a Solemn Pontifical Mass in the Extraordinary Form in the Abbey Church at Downside on Thursday 12th August at 11.00am. He will also deliver a lecture as part of the conference.

Around 30 priests are expected to attend the conference where tuition will be given in the celebration of Mass in the older form. Some will be beginners, and will be studying Low Mass; whilst others with more experience will be expanding their skills to include Missa Cantata and Missa Solemnis. Tuition will also be provided for altar servers.

Bishop Schneider is best known for his defence of the traditional practice of receiving Holy Communion on the tongue and kneeling. His book, Dominus Est, originally written in Italian but now available in English, deals with this subject in some detail.

The public will be able to attend the 11.00 am Mass in the Abbey Church each day of the conference, but will be particularly welcome at the Pontifical Mass on the Thursday.

There are a few last minute places available at the Downside conference. Priests and potential servers interested in attending should contact the Latin Mass Society by telephoning 020 7404 7284 for further information and an application form.

1 This conference will be the sixth to be organised by the Latin Mass Society during the last three years. Earlier ones have been held at Merton College in Oxford, Ushaw College in Co Durham and All Saints Pastoral Centre in London Colney, Herts.

2. Over 100 priests have attended these conferences, of whom about 85 now regularly celebrate Mass in the Usus Antiquior.

3. Practically all restrictions on the use of the Usus Antiquior or Extraordinary Form were lifted by Pope Benedict XVI in his motu proprio, Summorum Pontificum, published in July 2007. Since then the number of both Sunday and weekday Masses celebrated in the Usus Antiquior has increased in all dioceses of England and Wales.

4. The website of the Latin Mass Society Masses includes listings of Masses celebrated in the Usus Antiquior: www.latin-mass-society.org
Posted by Annie at 6:34 PM No comments:

As I've not been around much in July...

...and shan't be much in August, I'm behind on a lot of things, so I've only just found a message from Jane in the Oasis , tagging me. Better late than never, I thought, so here are my top three (excluding of course the Our Father, Hail Mary, Glory Be, Hail Holy Queen, and the Fatima prayer!)

So in no particular order, we have,

#1. The prayer of St Gertrude the Great

Eternal Father I offer Thee the most Precious Blood of Thy Divine Son Jesus, in union with the Masses said throughout the world today, for all the Holy Souls in Purgatory, for sinners everywhere, for sinners in the Universal Church, those in my home, and within my family, Amen.

Holy Michael the Archangel, Defend us in the day of battle, be our safeguard against the wickedness and snares of the devil. May God rebuke him, we humbly pray, and do thou Prince of the heavenly host by the power of God thrust down to hell satan, and all wicked spirits who wander through the world to the ruin of souls, Amen.


And I tag Prayers for the Bishop
Posted by Annie at 6:25 PM No comments:

A reminder that Masses in Horsham...

...commence in September at St John the Evangelist , first Saturday of the month, at 6.00 pm.
Posted by Annie at 6:06 PM No comments: