Fabulous photos from Mary in Monmouth

Thought I'd let you know about a fab blog that has really excellent photos of ancient churches. The most recent post is of a 13th century church rebuilt and reconstructed using original materials at St Fagans Museum of Welsh Life. It can be found here.
Posted by Annie at 10:11 AM No comments:

Fr Agley celebrated a Low Mass for the Second Sunday of Easter, grateful thanks to Father.

It was such a beautiful afternoon we had tea outside following Mass, where Peter Cullinane spoke of the challenges facing the LMS following the MP/SP.

Chatting with people afterwards brought up a load of questions relating to how to square the EF and the ordinary rite. Not just to mantilla or not to mantilla, but how do you receive Holy Communion, do you genuflect, cross yourself, or bow, and what about Extraordinary Ministers. Some really interesting questions.

The next Mass at OLOC will be a 3.00 pm Missa Cantata, so if you've never been to one, or have never been to an EF Mass at all and you can make West Grinstead, give it a try, the more the merrier!
Posted by Annie at 7:30 PM 2 comments:

As Peter Cullinane said in his newsletter, there will be a get together after the 3 pm Mass at OLOC tomorrow.
Posted by Annie at 7:13 PM No comments:

Of blogs and blogging, a personal view.

The Holy Father celebrates his birthday today, long may he reign!
Posted by Annie at 9:39 AM No comments:

Have a Holy and Happy Easter!

The second of the three parts of Archbishop Sheen's explanation of the Mass. Part three tomorrow. 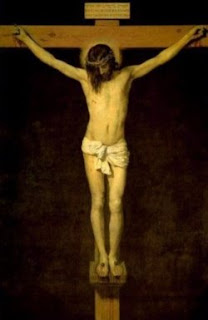 ...that a full list of Easter Masses can be found here Latin Mass Society

In A&B, Our Lady of Consolation at Park Lane, West Grinstead has Low Mass at 3.00pm on Sunday.
Posted by Annie at 10:32 AM No comments:

One of my heroes is Archbishop Fulton Sheen. I love this video of him explaining the Mass. I hope you enjoy it!

The Franciscan Sisters of the Immaculate

‘To veil or not to veil, that is the question…’ 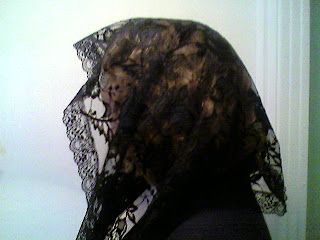 It’s controversial and an often emotive subject, and one that’s quite close to my heart, so I thought I’d write some very brief thoughts down on the subject.

Nailing my courage and my least favourite mantilla to the sticking place, I’ll at once admit that I think veiling is a lovely thing to do, and wouldn’t dream of not wearing one when I’m at an EF Mass. I’ll also admit that I’m inconsistent, and I don’t wear one when I’m at an OF Mass, but I wish I did. So why do I, and why don’t I?

There are many great articles about why a woman should cover her head, and about why it’s no longer required and I read these articles many times over, one in particular from Fish Eaters. Being a bolshie sort it takes a lot to convince me of anything, but I came to the conclusion that far from being demeaning, or implying women to be second class Catholics, the very opposite was true.

So why do I? Most unspiritually, because it’s always been the Catholic thing to do and what’s so wrong with a two thousand year old tradition? It’s part of our Catholic heritage which I believe we ought to claw back, along with other Catholic traditions that I wasn’t brought up with. More spiritually speaking, putting on a mantilla in the narthex makes me reflect on where I am, and Our Lord, who I am about to meet. It’s something I can physically do to show respect, it’s something I do nowhere else and for no-one else, it’s just for God.

Why don’t I then at the OF, if I feel it’s so important and meaningful? Number one, I suppose I’m a coward who doesn’t want to stand out from the crowd. I’m very conscious that wearing distinctive headgear (however flat and lacy) can be considered to be distracting to others when it’s perceived to be ‘out of context’, or even anachronistic. It can smack of the holier than thou, although it really isn’t and isn’t meant to be. I’m still grappling with this one, one day hopefully I’ll be brave enough, although I do sometimes wear a hat, but usually only when it’s raining!

So, ladies and gentlemen, what do you think?

Update: I started veiling at NO Masses shortly after writing this post, no longer able to cope with my own double standard!
Posted by Annie at 6:05 PM 10 comments:

Today after the lunchtime Mass, the second confessional had to be opened because of the length of the queue. I thought that was rather good!
Posted by Annie at 5:53 PM No comments:

I don't believe you can have too many pictures of Pope Benedict, so to get this blog off to a good start, here's one of my favourites: 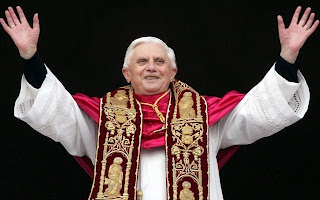 The Lord preserve him and give him life, and make him blessed upon the earth, and deliver him not to the will of his enemies.

This is the new blog for the LMS in Arundel and Brighton, aiming to introduce more people to the beauty of the Extraordinary Form, also known as the Traditional Latin Mass.

A list of Palm Sunday, Holy Week and Easter Masses can be found here at the Latin Mass Society web site.

In Arundel & Brighton there is a Low Mass on Easter Sunday, 12 April, at Our Lady of Consolation, Park Lane, West Grinstead at 3.00pm. (Thanks, Clare, for the photo of the Secret Chapel) 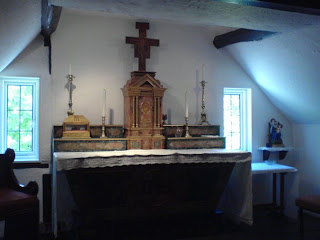 Newer Posts Home
Subscribe to: Posts (Atom)
"The one perfectly divine thing, the one glimpse of God's paradise given on earth, is to fight a losing battle - and not lose it."
G.K. Chesterton, Time's Abstract and Brief Chronicle