W Grinstead (and the Feast of St Anne)

Once again today at Our Lady of Consolation, we were privileged to assist at the Extraordinary Form. The sermon was a real heartener - it was such a battery recharge! We were lucky to have Fr Talbot, Chaplain at Chavagnes, as the celebrant, thank you very much Father! Chavagnes International College, as some of you may already know, is a Catholic school for boys in France, which follows a fantastic and unapologetically Catholic line. It was the subject of a Channel 4 documentary some time ago, you may have seen it, which was infamous not for Catholic education, the boys, staff or even for being run by English in France, but because of the staged bunny send-off which had not happened before, or happened since, C4's departure.

There was of course lots of chat following Mass, and a couple of things cropped up in conversation. One of which was how to encourage families to come to the EF. Now, this is one of my big moans, because 3.00pm on a Sunday afternoon, or 7.30pm on a weekday evening, or midday on a Saturday can be totally unchild-friendly times to have a Mass. Not that I'm ungrateful, far from it! I grab an EF whenever I can, family committments permitting.

But not many young families fancy an hour's drive to Mass on a fine Sunday afternoon if there's a 9.00am just up the road (all the EFs available in the Diocese are 45 minutes to an hour+ away from me). Mass at any time with children -even locally- requires an amount of logistical planning Winston Churchill would have been proud of. In my experience mid-afternoon/mealtimes/bedtimes are when most kids/toddlers/babies are at their most bad tempered, tired and recalcitrant. It can also make doing anything as, or with, your family almost impossible, especially if Sunday is the only day of the week you have off work.

This means there is no opportunity to introduce the EF to people. A cynic would say that that's the ultimate plan: To keep people from it in the hope that the EF will just die out.

Well, sorry, but given the MP, and being one of those who never knew the Old Rite being a post VII-er, but fell in love with it anyway, I can't see that happening!

So what am I saying? I think I'm saying that if we're serious about the EF, we have to encourage/beg/plead for Mass times that are more family friendly.

There are many churches on Sundays in my far east part of the Diocese which may only have an 11.00 am. What's wrong with an EF at one of those at 9.00am? And if we do get more convenient Mass times, even just once a month? Well, I don't think they would be bursting at the seams at first as the EF is a completely different liturgical kettle of fish to the NO. But to be honest, I don't think that matters: brick by brick.

Which of course brings us to the supply side of things. I touched on the demand in my last rant. I'm not going to say anything particular about supply at the mo, as I haven't got time, I'll just say that supply isn't necessarily the problem.

Now, St Anne! It's her feast and my name day (I also have two others, lucky me!), and I would like to thank her for taking such great care of me over the years - I don't know how I'd manage without her, and now I'm going to celebrate with a nice glass of red and then some cake!
Posted by Annie at 6:49 PM No comments:

There will be an EF Mass celebrated at St Pancras, Irelands Lane, Lewes, at Noon on Thursday, 6 August (Feast of the Transfiguration). This has been requested by St.Catherine's Trust. The parish website can be found here.

Many thanks to Mr Cattermole for letting me know!
Posted by Annie at 12:24 PM No comments:

...can I recommend that you try the Summer edition of Dowry, the FSSP newsletter! It's out now, and can be read here.

If you feel you would like to offer support to the great work done by the FSSP in England, a form can be found here.
Posted by Annie at 7:32 PM No comments:

The Woman I Love

I was browsing youtube like I do, well, it's wet and windy, that's my excuse, and up popped some more videos. Of Fulton Sheen. So I thought I'd put them on the blog.

Prayers for His Holiness 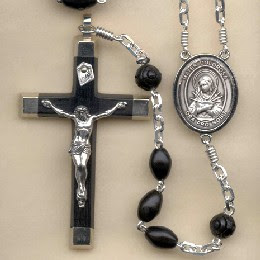 Hope the wrist gets better soon!


We always seem to leave the house in a rush on OLOC Sundays, and as the traffic can be heavy at the best of times, we have to leave in plenty of time so I always forget to take my camera. But one of these weeks I will remember, and I'll even make sure the battery's charged!

It was another very prayerful Mass this week. Following in my missal, the depth and richness of it never ceases to amaze me, there's always something new to find. I don't always use my missal, sometimes if I just can't clear my mind to concentrate, I go with the flow, other times I concentrate better without turning pages. I find within the structure of the EF more freedom and more challenge. It's a bit like a certain beer advert from a while back, the usus antiquior simply refreshes the parts other forms can't reach.
Many thanks to Father for celebrating Mass, and giving an interesting and thought provoking sermon.

You know, if you haven't tried an EF Mass yet, you should, they're really rather good!
Posted by Annie at 10:18 AM No comments:

It would seem that some of my e-mails are thought to be spam! The cheek!
If you are expecting one from me, can you check your spam because there's a possibility that's where it might have ended up.
Posted by Annie at 11:30 AM No comments:

I know October is a long way off...

...but it's not too early for me to start plugging the Missa Cantata at Arundel Cathedral on Sunday 11 October at 3.00 pm.

Please put the date in you diaries!
Posted by Annie at 11:11 AM No comments:

This is great news, His Holiness has approved Cardinal Newman's Beatification, read all about it here.
Posted by Annie at 3:21 PM No comments:

I know it's bad form to moan, but sometimes I've just got to get things off my chest. Today's one of those days. I would blame the heat, but I can't today as it's currently overcast and there's a coolish breeze. I've just received another questionnaire from another disappointed lover of the EF. I've got a whole stack of replies now, and they all say more or less the same thing: We want to have the EF.

Now don't get me wrong, while this information is tremendously good news, it does make me feel a tad peevish.

So I'm going to state what is to me the blindingly obvious in no particular order, just thinking about the demand side of things:

-To attend an EF Mass, unavoidably, you currently have to travel quite long distances unless you're a resident of a lucky town. If you are unable to get there for whatever reason, you can't attend. Non-attendance doesn't mean you don't want it, it means you can't get there.

-To attend an EF Mass to fulfil your Sunday obligation, you have to travel quite long distances at usually really inconvenient times (if you are lucky enough to find one at all). Non-attendance doesn't mean you don't want it, it means you can't get there.

-To attend an EF Mass does not make you any more a nutter than people who actively seek out Family Masses. It's just people get the opportunity to choose to go to a Family Mass.

Some of the chat last Sunday was about the expansion of the east A&B questionnaire to the rest of the Diocese, which I think on reflection would be a good idea. The return postage would, however, be a bit steep, so I'm going to be doing things a bit differently for this one.

The questions will be exactly the same, but you will have to leave a not-for-publication request in the combox (along with your own e-address of course), so I can send you an e-questionnaire as an attachment. Then you can send it straight back to me. If, though, you know a member of the LMS in A&B who has no internet access but would like to answer one, let me have the person's name and then I can post one.

The more feedback the better!
Posted by Annie at 12:02 PM No comments: