I really want to see this.

A little bit of sanity in a mad, mad, world.

Reading the news is always so depressing. Secular news, I mean. There's no end to the misery and complete twaddle peddled as news.

This, for instance, regarding the length of Her Majesty's vowels. Dame Helen Mirren thinks HM has got a bit common.

On the other hand, reading Catholic news can also be depressing, but in a slightly different way, and at least there's always some light at the end of the tunnel. When resignations happen in a place of Catholic (?) education, you know things might start to perk up, or at least become more honest, even if currently the situation's a bit of a dog's breakfast.

So it was such a tangible relief this week to read that Our Lord was actually, after all, married, yes, married (for a more nuanced reporting, see HERE,) 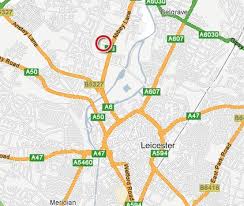 but more importantly, that He came from Leicester.

Mass in Bexhill this Sunday. 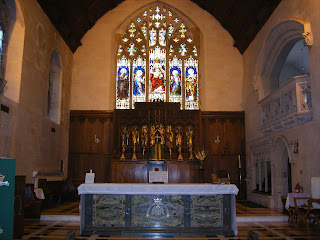 When my time comes...

...just for the record, I do not want to be waved to my final reward by a comforting lady (or man), possibly wearing a purple fluffy jumper, however duly commissioned and well-meaning, who celebrates my life in front of the gathered community.

I want a Requiem Mass (EF goes without saying), said by a Priest, with lots of black, where people pray for my immortal soul, because as God knows, I'll need it!

I know many of us who assist at the Extraordinary Form Masses knew Mr Graham Bell, so I was saddened to hear this morning that he died suddenly last week. He was very attached to the Old Rite and drove miles, all over the Diocese, to find them. He was always absolutely charming, a delight to chat with, and as his daughter described him, 'an officer and a gentleman'.

A Requiem Mass for him will be said next Tuesday, 18th September, at St Richard's, Chichester, at Noon. The celebrant will be Fr Richard Biggerstaff.

Eternal rest grant unto him, O Lord, and let perpetual light shine upon him.

Please say a prayer for him!

Masses at Bognor for the Diary.

There will be a Low Mass  at Our Lady of Sorrows, Bognor Regis on the following  dates: Saturday, December 8th, Feast of the Immaculate Conception, at 12.30 p.m.
Thank you Fr Churchill!
(Please see side bar for the address)
Posted by Annie at 4:43 PM No comments:

This is a must read.

I discovered this on Fr Finigan's blog, it's an open letter from an African woman in England to that champion of women who loathe their nasty, nasty, fertility, and who see kids as a parasitic encumberence, Melinda Gates.

Please read it, and share it with anyone you know who erroneously believes the West knows Best.
Posted by Annie at 8:41 AM No comments:

Why am I not surprised...

...that Channel 4 would drop this programme?
Posted by Annie at 8:35 AM No comments:

...you left a comment a while ago, and it would be good to chat about it. Could you please leave another message in the combox, with your phone number, and I shall ring you back but not publish the number, or the comment! Hope you read this...
Posted by Annie at 2:15 PM No comments:

Walsingham, and the Trials of No Internet

Normal (?) service has resumed much later than I anticipated due to our router going awol while we were in Walsingham. I don't think the two were related. On our return, we were aghast and devastated at the loss of so key a piece of communication equipment. Our internet provider dispatched a replacement, eventually, but unfortunately relies upon the efficiency of Royal Mail for its deliveries, and has no concept, as most other couriers and companies do, of express delivery.

You can see why we had a wait. An outraged email can now be sent. 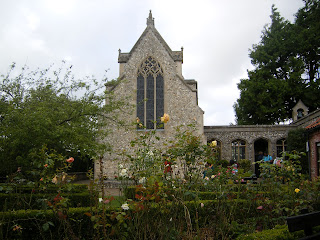 But to Walsingham. I am very, very, fond of Walsingham, having visited the Shrine and the village and its environs since I was little. So the chance of a weekend in Norfolk, joining in the tail end of the LMS Pilgrimage from Ely was too good to pass up. Not that we weren't mortified, you understand our hotel was just awful, as only English hotels seem to be (I've never seen a ceiling held up with staples before and I won't begin to describe the bathroom), but the pub along the lane more than made up for it, as did finding some of my long gone relations in the churchyard at Binham.


We walked from Walsingham to the Slipper Chapel, and a few minutes after we arrived, so did the real walkers from the opposite direction: 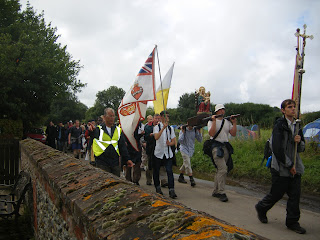 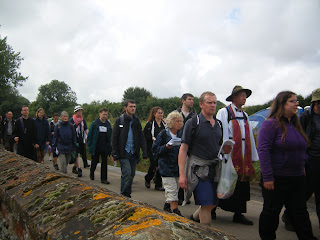 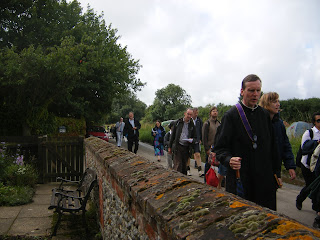 I didn't take any photos of the Mass, but here's one afterwards, before we started the walk to Walsingham: 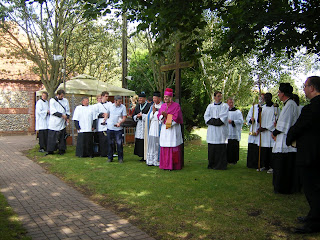 ﻿
The procession with the statue of Our Lady of Walsingham was something I've never done before and hope I get to do many more times. There was something incredibly spooky, in a good way, about walking along that road with so many people, as so many people did before You-Know-Who did You-Know-What, honouring Our Lady. Being loud in Latin and stopping the traffic was fun too.
And here's one of the many I took of the marshes, because I really love marshes, and because I can.﻿ 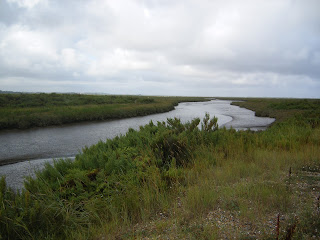 UPDATE: Here is the official press release, which I've just discovered in the backlog of emails:

Bishop Mark Davies of Shrewsbury preached at the Solemn Mass offered to mark the end of the Latin Mass Society’s 3rd Annual Walking Pilgrimage to Walsingham on Sunday, 26 August. The Mass was celebrated by Canon Olivier Meney, ICKSP, with Fr Bede Rowe (the pilgrimage chaplain) as Deacon and Fr John Cahill as Sub-Deacon. Gregorian Chant was provided throughout the pilgrimage by a schola assembled from amongst the walking pilgrims and directed by Matthew Schellhorn, who is also our Local Representative for Southwark North.
Around 70 people took part in the three-day, 55-mile walk from Ely in Cambridgeshire to the Slipper Chapel in Walsingham, which was offered for the conversion of England.
The pilgrimage began with Sung Mass, celebrated by Fr Cahill, offered on the Friday morning at St Etheldreda’s Catholic Church, Ely. The MC was Rev James Mawdsley, one of the English seminarians studying with the FSSP. Mass was followed by the traditional Pilgrims’ Blessing given by Fr Rowe. A visit was then paid to Ely Anglican Cathedral to prayer for the conversion of our separated brethren. By the end of the afternoon, the pilgrims had been blessed with beautiful sunshine and had reached their first billet at Stoke Ferry near King’s Lynn.
Sung Mass on Saturday morning was in the family chapel at Oxburgh Hall, a fifteenth-century moated manor house, which, although now owned by the National Trust, is still lived in by the Bedingfield family whose ancestors built it. Oxburgh has a long history as a centre of recusancy and boasts its own priest’s hole, which pilgrims were given the chance to visit after Mass.

The pilgrims continued through Saturday, praying the Rosary, singing hymns and songs, and getting absolutely soaked through as the heavens opened and thunder and lightning let loose on the Norfolk landscape. By the time the procession of pilgrims reached Harpley village, their Saturday evening stop, spirits had recovered somewhat, which was further aided by a visit to the Rose and Crown pub in the village.

Sunday saw the last leg of the pilgrimage and the tired pilgrims reached their destination of the Slipper Chapel. They were joined by a coach full of people who had travelled from London for the day to attend the final Mass in the Chapel of Reconciliation at the National Catholic Shrine. Following Mass, Bishop Davies gave his blessing (in Latin) to the pilgrims.

The statue of Our Lady of Walsingham, which had been carried throughout the final day of the pilgrimage led the procession of well over a hundred people along the Holy Mile to the grounds and ruins of Walsingham Abbey, the site of the Holy House of Nazareth, built by the Lady Richeldis in 1061 and which, like the abbey, was destroyed under Henry VIII’s Dissolution of the Monasteries. Prayers of thanksgiving were offered by Fr Bede Rowe followed by veneration of the statue of Our Lady.

LMS General Manager, Mike Lord, said: ‘This year’s pilgrimage was the most successful yet, with the number of participants rising to 70 from last year’s total of 30. This is very encouraging. Several family groups joined us, which we were delighted about and, although most pilgrims were young people, there was a good spread of ages. Everyone was most  impressed by two ladies aged 84 and 86 who completed the walk.

‘We are very grateful to Bishop Davies for agreeing to attend in choro for the Solemn Mass and for preaching. There are many other people who put in many hours of work to make this event the great success it turned out to be and we would like to thank them all.
‘We hope that our pilgrimage, with the many prayers and personal sacrifices of the pilgrims, and the Masses offered up during the three days, will bring many graces upon England and assist in its conversion.’
For further information, please contact Mike Lord, General Manager,
on (T) 020 7404 7284; (F) 020 7831 5585; (E mail) michael@lms.org.uk