Response from the Biased British Corporation

Thanks for contacting the BBC.

I understand that you feel there was insufficient coverage of the Pope's visit to Spain and World Youth Day in comparison to the protests in Madrid against the visit.

Whilst I appreciate your concerns, choosing the stories to include in our bulletins and programmes; the order in which they appear and the length of time devoted to them is a subjective matter and one which we know not every viewer and listener will feel we get right every time. However we are confident that we also provided coverage across the BBC of the Pope's visit in a number of reports, including online reports such as those below:
http://www.bbc.co.uk/news/world-europe-14568707

Nevertheless, we’re guided by the feedback we receive and I can assure you I've registered your complaint on our audience log. This is a daily report of audience feedback that's made available to all BBC staff, including members of the BBC Executive Board, channel controllers and other senior managers.

The audience logs are seen as important documents that can help shape decisions about future programming and content.


Unfortunately, he didn't seem to register my contempt for the TV Tax...never mind...Still, they do log complaints, so complain away if you feel so moved!
Posted by Annie at 2:59 PM 1 comment:

As you might have gathered from some comments I've made in the past, I'm not entirely comfortable with girl altar servers!

Fr Z is running a poll at the moment, asking for your opinion. Please go over and vote.
Posted by Annie at 4:08 PM No comments:

WYD, The Horrible BBC, Michael Voris, and How I Cheered Up

I'm going to be complaining to the BBC about it's lamentable coverage of the events of WYD along with other people. I watch virtually no BBC programmes, but still, mea culpa, catch the news, even if it can make me froth at the mouth.
It is a bit much to expect balance from our supposedly impartial compulsorily funded (if you want to watch any TV at all) broadcasting corporation, but I had hoped for better, all the while knowing that good news, especially Catholic good news, is no news. Watching a load of angry old faces is much more telegenic than young peaceful and happy ones.

Given how taken the media were with youth rioting in the UK and how awful it was, it would have been nice to see some youth behaving beautifully in contrast, woudn't it? The Beeb do like youth after all (anyone else notice Dr Who is becoming progressively younger? If he regenerates another couple of times, he'll be an eight year old).

So I thank God for EWTN and Catholic media in general and was lucky to be able to catch most of the coverage of WYD on EWTN. Weren't those Stations of the Cross beautiful? It was brilliant to see so many young people so happy, to see the Holy Father so happy, even during the storm. Everything the Holy Father said was great. I especially loved his address to the disabled, all life has value and is of infinite worth. Again, not very newsworthy is it, to affirm all life as good?

Which brings me to Michael Voris, who is in the UK and speaking in London tomorrow.  I'm really sorry I can't get to hear him, but I have the net to make up for it. I'll be frank: I like what he says. He can be a bit, er, confrontational, in style as well as in content (and what is it with that pencil?) but that's not always a bad thing. Sometimes it's quite nice to hear something less fleecy and cuddly.

And so to me, a viewer, participating remotely, miffed to the nth degree by the failures of the above mentioned, I decided the only way to cheer myself up, and in honour of Madrid, was to buy a Spanish mantilla. So I have. I've tracked it eagerly from Spain to Germany, and await its delivery some time today, and I only ordered it on Saturday. How's that for service?

Update: Mantilla arrived and is beautiful.
Update part deux: I have also had a really good rant on a BBC complaint form. I can recommend it as highly cathartic. 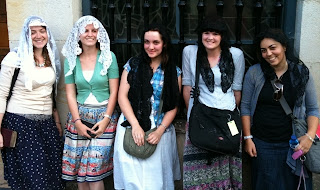 The Latin Mass Society (LMS) has welcomed back home a group of young Catholics that it sponsored to attend World Youth Day in Madrid.


The LMS teamed up with Juventutem, the international youth movement that supports the Traditional Latin Mass, and funded over twenty young people from England and Wales to attend two weeks of events in Spain culminating in Pope Benedict’s visit to Madrid.


Juventutem organised a week-long ‘pre-retreat’ event based at the Carmelite monastery of Amorebieta-Etxano near Bilbao in the Spanish Basque Country, that combined daily Traditional Mass and talks about the Catholic Faith from priests of the Fraternity of St Peter with fun social and recreational activities around the region.


The Juventutem group then went to Madrid to attend WYD, where the English and Welsh pilgrims mixed with many other Catholic youngsters and clergy, many of whom had not come across the Extraordinary Form Mass before. It was a wonderful experience for all those who were there.


Teresa Nevard, one of the English pilgrims, and WYD co-ordinator for Juventutem in England and Wales said:


‘We had a fantastic time in our pre-retreat in Bilbao and in Madrid itself for WYD. All 22 of us from the UK Group are really grateful to the Latin Mass Society for the sponsorship which enabled us to attend and show our support for the Extraordinary Form of the Mass and for the Pope, by joining in some WYD events as well as our daily Pontifical Masses.  These Masses were all attended by close to 1000 people with standing room only and included those experiencing the beauty of the Traditional Latin Mass for the first time.  The numbers of young people attending Juventutem Masses and events in the UK have risen a lot over the last year and we anticipate another increase following the great time had by all of us who attended WYD with Juventutem.’ 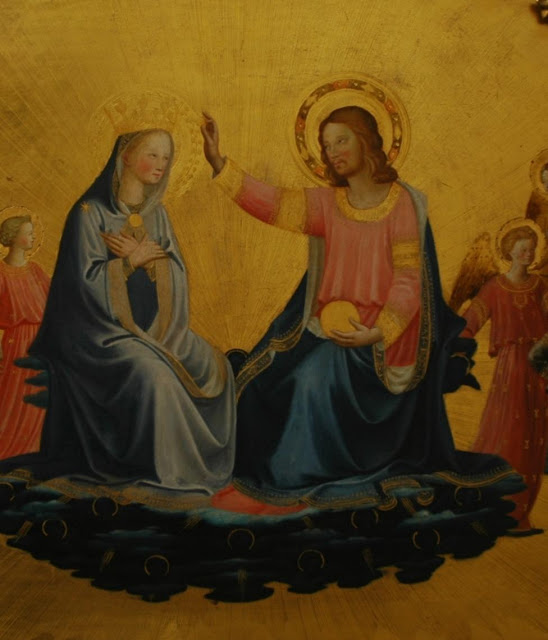 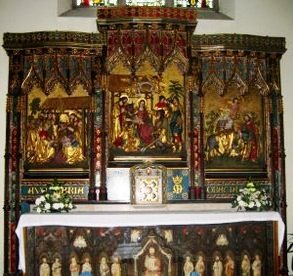 If you've seen the post below this one, you will know that this week the EF was said at Our Lady of Ransom. It was three mornings of absolute bliss; peaceful, prayerful, getting straight down to it, honest to goodness Mass. No fuss (apart from the inevitable dashing about for missing kit before hand, playing hunt-the-paten/cruets/communion wine), no frills, just Mass. Many thanks to the celebrant, Fr Charles Briggs, who was down for a few days R&R. The surprise EFs at Our Lady of Ransom drew a congregation of about 20, mid week in August. So that's mid week...hmmm...how many do you think would like to come on a Sunday?

One gentleman who came along had seen that it was an Extraordinary Form Mass on the parish newsletter, but hadn't twigged what it meant. "You can imagine my joy," he said "when I saw it was The Mass." The Mass he knew, loved, and very obviously missed for the last 40+ years. He can't get along to the EF Masses outside the parish, but would be over the moon if they were available in his home parish.

'Oh, but there isn't really enough demand!' we hear. Well, with all due respect to those spouting this and other (rather patronising to my mind) views, what of faithful Catholics like this gentleman, who have put up with -if not suffered- the NO for years? Not everyone who lived through the demise of the Old Rite was enthused to bash a tambourine and praise the New. Listening to people, they remained Catholics in spite of, not because of, the New Rite, and it has caused them a lot of pain to see the reverence, dignity and uniqueness of the Mass disappear.

It was also really great to meet up with Mulier Fortis and swap stories over copious pots of tea! We were watched over by images of Mr Pickwick,  Little Nell, Oliver Twist and Pip.

(Apparently the chap on the right visited the town once, and so a tea shop was born. Lewis Caroll used to come to the town regularly, and I've always been amazed that there is no Wonderland or Cheshire Cat tea room).


Tomorrow there is Mass at Our Lady of Consolation, West Grinstead, have a look at the sidebar for details, and I hope to see you there!
Posted by Annie at 11:53 AM 3 comments:

Masses at Our Lady of Ransom, Eastbourne this week 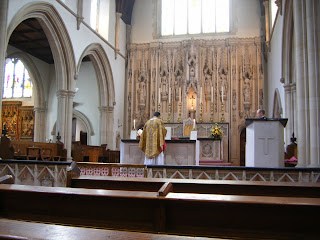 The Feast of the Assumption, 15th August

'Not even for ready money'

There will be NO MASS at Seaford on Sunday 23rd August, Fr Bruno is at WYD in Spain.
Posted by Annie at 11:10 AM 2 comments: