We drove up to Walsingham for the Pilgrimage, and joined the walk from the Slipper Chapel after High Mass on the Sunday. On the Saturday we had a demolished buildings crawl, and went to two of my most favourite places in England, Castle Acre, which we had entirely to ourselves in the drizzle (perfect!), 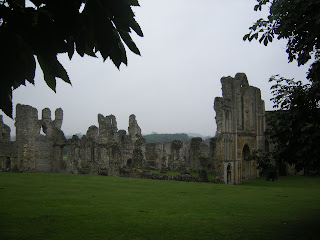 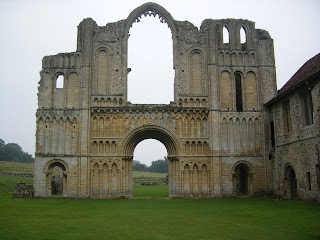 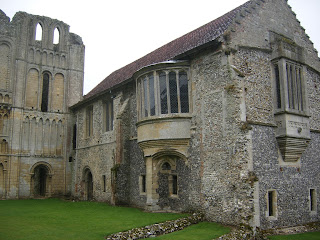 and Binham Priory, where I said hello to some of my distant ancestors. 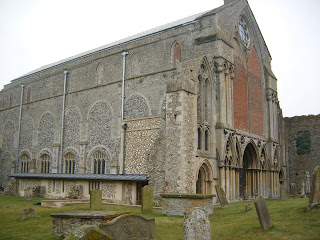 I love the sensitive brick infill. 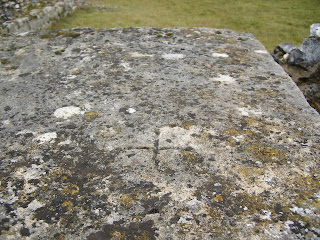 Nice to see they couldn't smash everything up, and there are some interesting finished and almost finished pew carvings, as well as the lovely font, vandalised, of course : 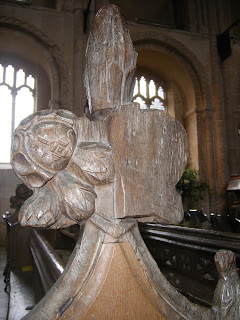 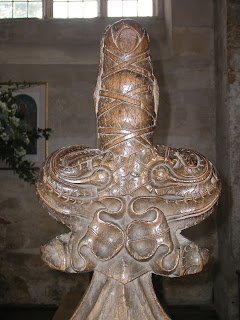 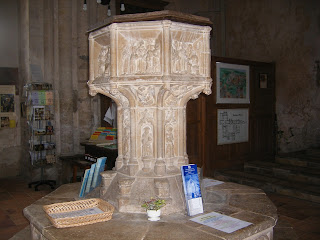 There was a harpsichord rehearsal taking place when we visited which added a certain je ne sais quoi.
So to Sunday. I love the Slipper Chapel, but am always bitterly disappointed by the lack of other Devotional Opportunities at the Catholic Shrine. In Walsingham at the Anglican shrine, there are side chapels and altars, the replica Holy House, space to wander and pray, space to sit and contemplate. At the Catholic Shrine, there's the great barn of a worship space with its frankly hideous glass wall that reminds me of a scaled up religious version of great aunt's wine glasses, the two small chapels, and the tea shop and shop (which didn't even have any green scapulars. I was shocked. And disappointed).
So after the Chapel, and doing the shop and tea shop, and sandwiched between the booming bass from the youth event in the field across the road, and terminally dull hymns coming from the Great Barn Worship Space, we waited for High Mass. (For the record, I prefer booming bass any day to an interminable load of hymns).
High Mass did what it said on the tin, and refreshed the parts other Masses cannot reach. Although prole that I am, I really prefer a Low Mass, there's something about the profound silence you can't beat.
The walk from the Slipper Chapel to Walsingham is the most moving experience. It's something everyone has to do, at least once. It hammers home the Communion of Saints, our connection to the Holy Souls, like nothing else. We were just the latest in a line of pilgrims stretching back centuries, and if that thought doesn't make the hairs stand up on the back of your neck, I don't know what would! To end up at the site of the original Holy House is amazing. And never has Faith of Our Fathers sounded so good. I didn't want to ever leave.

The Latin Mass Society’s annual walking pilgrimage to the National Shrine of Walsingham took place over August Bank Holiday weekend. The fourth consecutive year of this event saw 90 people (a 25% per cent rise on last year) undertaking the three-day journey on foot to ‘England’s Nazareth’. The intention of the 55-mile walk, which started in the cathedral city of Ely in Cambridgeshire, was the conversion of England. Pilgrims slept in tents or on the floors of school and village halls along the way and clearly many found it more challenging than they had expected, but all managed to reach the Shrine in time for Solemn Mass in the Extraordinary Form on the afternoon of Sunday, 25 August.

Four priests accompanied the pilgrimage. Fr Bede Rowe of Clifton Diocese, presently based at Chavagnes College in France, was chaplain of the pilgrimage. He was joined by Fr Thomas Crean, OP, of Holy Cross Priory, Leicester, Fr John Cahill of Northampton Diocese, and Fr Michael Rowe (no kin) from Australia. In addition, three English seminarians from the Fraternity of St Peter joined the event as well as member of the Dominican community at Blackfriars, Cambridge. Traditional Solemn Mass was celebrated every day of the pilgrimage, most notably at Oxburgh Hall in Norfolk, a fifteenth century moated manor house and former recusant home, still lived in by the Bedingfeld family. 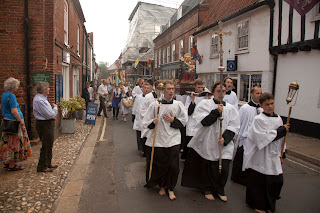 Walsingham High Street
LMS General Manager, Mike Lord, said: ‘By common consent, this has been the best year for this pilgrimage so far. The overwhelming majority of walkers are young families and young people, showing the continuing vitality of the Traditional Mass and Faith. Many are encountering the Old Rite for the first time and have found the experience of the traditional spirituality of the Roman Rite and the spiritual and physical discipline of a walking pilgrimage an inspiring and transforming experience. Our entrance into Walsingham itself was memorable. On other public pilgrimages organised by the LMS, it is common to encounter hostility in the street, but as we approached the gates of the Abbey grounds to the former site of Lady Richeldis’s Holy House, the response of bystanders was very positive, even awed.’ 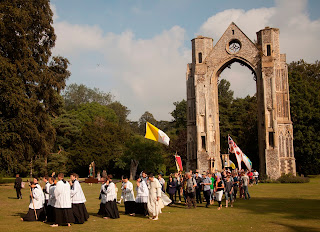 The LMS plans to release a short film documentary in the early autumn about this year’s pilgrimage to inform and inspire others to join them for next year’s event.