Fr Ray Blake has a post up about maniples. Like birettas, mentioning them can appear quirky and rather irrelevent. We have earthquakes, tsunamis, starvation, disease, political unrest and upheavel, war and pestilence to worry about. Why give them the time and brain space? And I kind of appreciate that point of view, kind of.

I spent my formative years having to sing Colours of Day and anything else that was sublimely trite written by Miscellaneous Sisters Anonymous et al, all very well meaning I'm sure, but still enough to make me writhe with embarrassment even back then, at Masses celebrated by priests wearing easy care cream polyester.
I think even then I yearned for something I'd only seen in black and white movies and Nun's Story: dignity and reverence, and a lot, and I mean a lot, of special vestments. In effect, I was desperate for the return of what I now think is encapsulated in the maniple. And the biretta for that matter, and dare I bore you, for us ladies, the chapel veil (plug plug).

I've done the holding hands round the altar at the Ordinary Form during the Consecration (gentle Reader, I was very young and knew no better), and sat cross legged round coffee tables while Mass was said at house Masses (uber cringe then, absolute horror now), and I know from these experiences that that kind of trivialisation of the most important thing in the world, the Holy Mass, is just so wrong.
It's been said time and time again, but if something doesn't look special, it won't immediately be seen as special. If you truly believe the Mass is at the heart of all things, and has the power to change the world, then why not show the world, and dress the part? 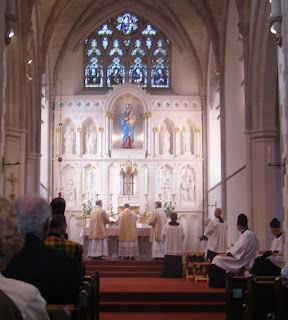 Birettas, maniples, chapel veils, let's see them, not just at the EF where they've never gone away, but at every Mass.
P.S. I just saw this on Valle Adurni. I'll let it speak for itself.
Posted by Annie at 11:10 AM