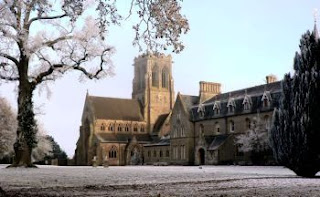 
To meet the continuing and growing demand for the Extraordinary Form, the Latin Mass Society will be organising another in its series of much-praised residential training conferences for priests and servers wishing to learn Mass in the usus antiquior. On this occasion, it will be held at Belmont Abbey, Hereford, HR2 9RZ. This will be the eighth such conference organised by the LMS since 2007, which has now trained well over 100 priests in the Extraordinary Form of the Mass. Bookings have already started to come in for the Belmont event.


Tuition, which will be given by experienced priests, will be tailored to suit the needs of each priest. The conference will also be open to servers who wish to learn or improve their skills with the older form of the Mass.
The fee for attending is £120,, inclusive of board and lodging at Hedley Lodge, which is adjacent to the Abbey. There is a concessionary rate available of £60.
How To Get There:
Hereford is close to the motorway network and is easy and quick to get to from most parts of England and Wales.
Rail: Hereford mainline station is two hours 50 minutes from London, around 90 minutes from Birmingham, two and half hours from Manchester, one hour from Cardiff and 90 minutes from Bristol.
Road: The M50 motorway (which connects from the M5) is about half an hour (or less) from Hereford. Belmont Abbey is about a mile and a half outside the city of Hereford.
How To Apply:
Please fill in an application form and send with your cheque (payable to 'Latin Mass Society') to the address on the application form.


Photo credit: Belmont Abbey
Posted by Annie at 9:49 AM